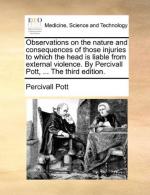 This encyclopedia article consists of approximately 6 pages of information about Percivall Pott and the Chimney Sweeps&#x0027; Cancer.

The English surgeon Percivall Pott (1714-1788) was the first to establish a causal link between cancer and exposure to a substance in the environment. In 1775 he described the occurrence of cancer of the scrotum in a number of his male patients, whose common history included employment as chimney sweeps when they were young. He related the malignancy to the occupation, and concluded that their prolonged exposure to soot was the cause. Pott's description of this disease, and his concern for the plight of these "chimneyboys," sparked a series of reports by other authors and brought to light a disgrace which took another hundred years to eliminate in England. Pott may legitimately be seen as a precursor to the modern investigators who seek to prevent occupational exposure to hazardous substances.

More summaries and resources for teaching or studying Percivall Pott and the Chimney Sweeps' Cancer.

Percivall Pott and the Chimney Sweeps' Cancer from Gale. ©2005-2006 Thomson Gale, a part of the Thomson Corporation. All rights reserved.