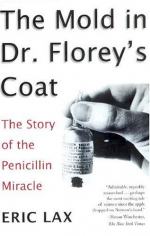 This encyclopedia article consists of approximately 4 pages of information about Penicillin.

(CH3)2C5H3NSO(COOH)NHCOR, where R represents any one of a number of substituted groups; see Overview

More summaries and resources for teaching or studying Penicillin.

Penicillin from UXL. ©2008 by U•X•L. U•X•L is an imprint of Thomson Gale, a division of Thomson Learning, Inc. All rights reserved.