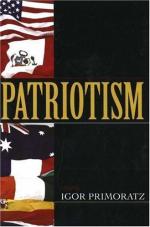 This encyclopedia article consists of approximately 4 pages of information about Patriotism.

War and patriotism are often two sides of the same coin because warfare produces strong feelings of nationalism as well as challenges to the nation's culture and society. Patriotism not only has made Americans feel more strongly about their ideals, but also has led to excesses in which those ideals of tolerance and defense of basic rights are compromised in the name of patriotism. Although patriotism became a common way of expressing national identity, it also divided Americans and created disputes about the meaning of loyalty.

Some of America's most important patriotic holidays and rituals of patriotism either originated or gained familiar, contemporary characteristics between the Spanish-American War and the end of World War II.

The Spanish-American War helped give patriotic celebration new national significance. A shift occurred in the meaning of Memorial Day, a holiday first called Decoration Day that originated in...

More summaries and resources for teaching or studying Patriotism.

Patriotism from Macmillan. Copyright © 2001-2006 by Macmillan Reference USA, an imprint of the Gale Group. All rights reserved.