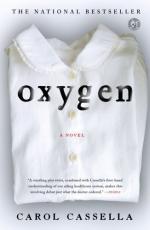 This encyclopedia article consists of approximately 11 pages of information about Oxygen.

Oxygen is the first element in Group 16 (VIA) of the periodic table. The periodic table is a chart that shows how chemical elements are related to each other. The elements in Group 16 are said to belong to the chalcogen family. Other elements in this group include sulfur, selenium, tellurium, and polonium. The name chalcogen comes from the Greek word chatkos, meaning "ore." The first two members of the family, oxygen and sulfur, are found in most ores.

More summaries and resources for teaching or studying Oxygen.