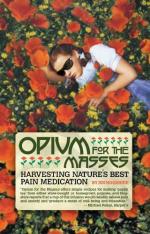 This encyclopedia article consists of approximately 25 pages of information about Opium.

Opium, the parent of heroin and a myriad of other addictive derivatives, has a long and fascinating history. Opium has been used for medical, religious, and recreational purposes, and has been featured in, and used to inspire, art, literature, and poetry. As an international commodity, it has been the focus of regulation, legislation, even war. Opium's addictive and detrimental effects have caused untold suffering throughout history. Its ability...

More summaries and resources for teaching or studying Opium.

Opium from Gale. ©2005-2006 Thomson Gale, a part of the Thomson Corporation. All rights reserved.