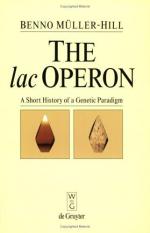 This encyclopedia article consists of approximately 5 pages of information about Operon.

An operon is a genetic regulatory system found in prokaryotes and the bacterial viruses (bacteriophages) that attack bacteria. It is a cluster of genes that share regulatory elements and are usually functionally related.

The Discovery of Operons

French scientists Jacques Monod and François Jacob first coined the term "operon" in a short paper published in 1960 in the Proceedings of the French Academy of Sciences. They elaborated the concept of the operon in several papers that appeared in 1961, based on their studies on the lac genes (genes for the metabolism of lactose sugar) of the bacterium Escherichia coli and the genes of bacteriophage lambda. Monod and Jacob received the Nobel Prize in 1985 for this work.

Figure 1. The lac operon. A single straight line signifies the double-stranded DNA molecule. The lac operon includes genes and control elements which are needed for metabolism of lactose.

More summaries and resources for teaching or studying Operon.

Operon from Macmillan. Copyright © 2001-2006 by Macmillan Reference USA, an imprint of the Gale Group. All rights reserved.