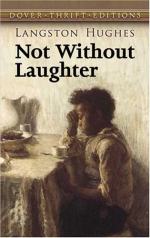 Not without Laughter - Research Article from Literature and Its Times

Langston Hughes
This encyclopedia article consists of approximately 14 pages of information about Not without Laughter.

Langston Hughes was born in 1902 in a small town in Missouri, and lived for several years with his grandmother in Kansas before joining his mother in Chicago, Illinois. Moving to New York City, Hughes enrolled at Columbia University in 1921, but was lured away from his studies by the glitter of Broadway and by the flourishing clubs in Harlem. Hughes journeyed to the thriving ports of Africa such as Dakar and Luanda to see what he referred to as the motherland of his people. Then he lived and traveled in Europe before returning to the States, where he became the most famous poet of the Harlem Renaissance. His first novel, Not without Laughter, won the Harmon Foundation Gold Award for Literature, a $400 prize awarded to outstanding black artists.

Exodus from the South...

More summaries and resources for teaching or studying Not without Laughter.

Not without Laughter from Gale. ©2008 Thomson Gale, a part of the Thomson Corporation. All rights reserved.