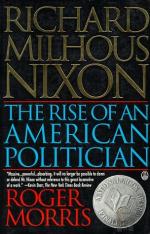 This encyclopedia article consists of approximately 4 pages of information about Nixon, Richard M..

As a Republican congressman, senator, vice president, president, author, and advisor, Richard M. Nixon played a central role in shaping American attitudes toward Communism throughout the Cold War (1946–1991). A committed internationalist, Nixon gained recognition initially as one of the nation's most vocal anticommunists. As president, however, Nixon's détente policies shifted American Cold War containment strategy from confrontation to negotiation.

Nixon's impact on American Cold War attitudes was felt from the start of his election to congress in 1946. As a member of the 1947 Herter Commission that investigated conditions in postwar Europe, Nixon was shocked by the devastation and became a strong proponent of the Marshall Plan to provide economic aid for reconstruction. Nixon's strong stand for internationalism helped to define the strategy the United States would follow throughout the Cold War.

Nixon, Richard M. from Macmillan. Copyright © 2001-2006 by Macmillan Reference USA, an imprint of the Gale Group. All rights reserved.