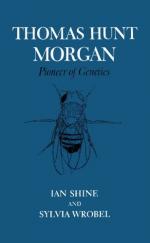 This encyclopedia article consists of approximately 5 pages of information about Morgan, Thomas Hunt.

Thomas Hunt Morgan proved the validity of the chromosomal theory of heredity and led a research group whose insights into the physical nature of inheritance propelled genetics into the center of biology in the twentieth century.

Morgan was born and raised in Kentucky, and received his bachelor's degree from the State College of Kentucky in 1886. He pursued graduate study at Johns Hopkins University in Baltimore, and eventually became a professor of biology at Bryn Mawr College in 1891. His early interests were in developmental biology and evolution. After moving to Columbia University in 1901 and coming under the influence of the great cell biologist Edwin Wilson, Morgan turned his attention to understanding the physical basis of inheritance, which he saw as a means to test theories about the role of mutation in evolution.

Morgan, Thomas Hunt from Macmillan. Copyright © 2001-2006 by Macmillan Reference USA, an imprint of the Gale Group. All rights reserved.