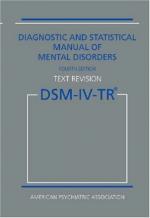 This encyclopedia article consists of approximately 6 pages of information about Mental Illness During the Middle Ages.

Mental illness remains a mystery wrapped inside a puzzle. Although much research has been done, mental disorders remain elusive, and their treatment is still disputed. No single paradigm for explaining mental illness exists.

It is no wonder that throughout history people of different cultures have explained deviant or abnormal behavior as the work of demons, external spirit forces, and poisons. As a result, magical approaches to therapy and rituals evolved. With the development of the Christian church during the Middle Ages, exorcism, shrines, and saints became of great importance for the treatment of mental illness.

During the early years of the Middle Ages the community took care of the mentally ill. Later, hospices, then asylums developed to house them. London's Bethlem asylum—better known as Bedlam—was founded in 1247, making it one of the oldest institutions of...

More summaries and resources for teaching or studying Mental Illness During the Middle Ages.

Mental Illness During the Middle Ages from Gale. ©2005-2006 Thomson Gale, a part of the Thomson Corporation. All rights reserved.