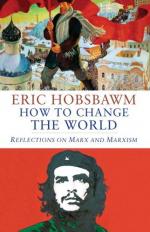 This encyclopedia article consists of approximately 40 pages of information about Marxism.

Marxist theory was developed in the 1800s by Karl Marx and Friedrich Engels. The Marxist ideology includes a philosophy of man, a political and economic program, and a theory of history. Marx's ideas were changed and altered after his death to suit the needs of those subscribing to them, and were changed further to accommodate communism as practiced by Vladimir Lenin in the Soviet Union in the beginning of the twentieth century. The hybrid created by Lenin is commonly called Marxism–Leninism, communism, or socialism, depending on the source. Marxism is a special brand of communism, specific to the time of Karl Marx. It was instrumental in forming the ideology of modern communism as well.

Marx's philosophy of man is that humanity is defined by its ability to...

More summaries and resources for teaching or studying Marxism.

Marxism from Gale. ©2005-2006 Thomson Gale, a part of the Thomson Corporation. All rights reserved.