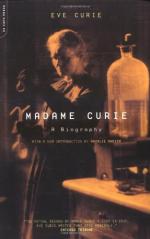 Marie Curie - Research Article from Science and Its Times

Marie Curie was the first woman to be granted a Ph.D. in Europe and the first woman ever to win a Nobel Prize (she went on to garner a second). A woman of enormous personal character, Curie stands as one of the most significant and influential scientists of the twentieth century.

Curie was born Manya Salomea Sklodowska on November 7, 1867, in Warsaw, Poland. She was the youngest of five children. Both of her parents were ardent educators, and instilled in their children respect for physical work and a love of the countryside and nature.

Curie excelled at school and finished first in her class in the gymnasium in 1883. At the time, Warsaw University did not admit women, and a young graduate's only options were to go abroad to study or to get married. Curie hatched a plan with her sister...

More summaries and resources for teaching or studying Marie Curie.

Marie Curie from Gale. ©2005-2006 Thomson Gale, a part of the Thomson Corporation. All rights reserved.