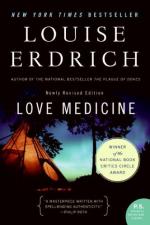 Love Medicine - Research Article from Literature and Its Times

Louise Erdrich belongs to the Turtle Mountain Band of Chippewa. She was born in Little Falls, Minnesota, in 1954 and raised in Wahpeton, North Dakota, a region near the Turtle Mountain Chippewa Reservation, the setting for Love Medicine. Erdrich began her writing career as a young girl, encouraged by her father, who paid his daughter a nickel for each of her completed stories. She graduated from Dartmouth College, earned a master's degree in creative writing from Johns Hopkins University, and married the writer Michael Dorris, with whom she collaborated when writing. Love Medicine, her first novel, won the National Book Critics Circle Award in 1984. In 1993 Erdrich reorganized and expanded the novel, adding an additional four stories.

The Chippewa. The Chippewa (also known as the Ojibwa in eastern Canada or as the Plains- Ojibwa or Bungi...

Love Medicine from Gale. ©2008 Thomson Gale, a part of the Thomson Corporation. All rights reserved.