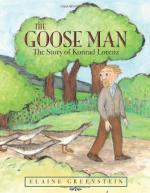 This encyclopedia article consists of approximately 4 pages of information about Lorenz, Konrad (1903-1989).

The Austrian zoologist Konrad Lorenz was one of the pioneers of modern ethology, the comparative study of animal behavior. Also noted for his views on aggression, Lorenz was a corecipient of the Nobel Prize for physiology or medicine in 1973.

Konrad Zacharias Lorenz was born November 7, 1903, in Vienna, Austria. By his own account he was fascinated from an early age with keeping and observing animals. He attended Columbia University in New York for one term in 1922, received an M.D. from the University of Vienna in 1928, and was awarded a Ph.D. in zoology by the same university in 1933. His first professional appointment was at the Anatomical Institute in Vienna; he later became professor of psychology at the University of Königsberg.

Lorenz's flirtation with Nazi ideology after the German annexation of Austria in 1938 tarnished his scientific reputation, especially in...

More summaries and resources for teaching or studying Lorenz, Konrad (1903-1989).