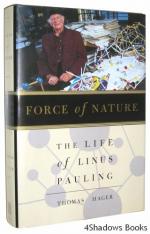 Linus Carl Pauling - Research Article from Science and Its Times

This encyclopedia article consists of approximately 2 pages of information about Linus Carl Pauling.

Linus Pauling is the only person to win two unshared Nobel prizes. His award in chemistry honored his work in elucidating protein structure, in particular the alpha helix. He was also honored for his leadership in opposing the development and use of nuclear weapons, which helped to assure the establishment of the 1963 Nuclear Test Ban Treaty. Pauling is considered by many to be the greatest chemist of the twentieth century, credited with seminal work on the chemical bond, artificial plasma, an explanation of sickle cell anemia, and many other achievements.

Linus Pauling was born in Portland, Oregon, the son of a druggist. He was a curious and imaginative child. He loved to visit his uncle's house where he would spend hours lying on the floor reading encyclopedia articles. Pauling attended public elementary and high schools, but didn't get his high school...

Linus Carl Pauling from Gale. ©2005-2006 Thomson Gale, a part of the Thomson Corporation. All rights reserved.