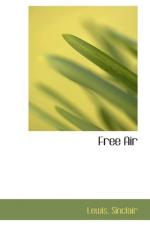 This encyclopedia article consists of approximately 10 pages of information about Lewis, Sinclair.

Excerpt from Babbitt
Published in 1922

Anative of the midwestern United States, Sinclair Lewis (1885–1951) chronicled through novels and short stories the changes brought by the shift from a mainly rural, agricultural society to one that was increasingly urban and industrial. The middle-class businessman and resident of the up-and-coming town of Zenith who is the title character of Babbitt is probably Lewis's best-known creation. The novel captures in realistic detail many of the major trends of the 1920s, including the worship of business, rising materialism and consumerism, boosterism (enthusiastic promotion), and the conflict between the older and younger generations. Lewis exposes a spiritual emptiness and complacency (being uncritically satisfied with oneself or one's society) at the core of his characters' lives.

Lewis was born in 1885 in Sauk Centre, a tiny village on the Minnesota prairie. He entered Yale University in 1903, pursuing his interest in writing and publishing his...

More summaries and resources for teaching or studying Lewis, Sinclair.