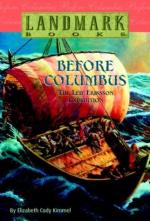 Leif Eriksson - Research Article from Science and Its Times

This encyclopedia article consists of approximately 3 pages of information about Leif Eriksson.

Half a millennium before Christopher Columbus's ships landed in the New World, Leif Eriksson and his crew of Vikings became the first Europeans to reach North America. They landed at several places on the coast of what is now Canada, and even established colonies; however, because they possessed no great technological advantage over the Native Americans, they were not able to hold on to the lands they had acquired.

Leif was the eldest of four children, all destined to travel to North America, born to Erik the Red. The father later moved his family from Iceland to Greenland, where in 986 he founded a permanent colony. Around this time, a Viking named Bjarni Herjolfsson was sailing from Iceland to Greenland when his ship was blown off course. Historians now believe that he was the first European to catch sight of North America; but...

More summaries and resources for teaching or studying Leif Eriksson.

Leif Eriksson from Gale. ©2005-2006 Thomson Gale, a part of the Thomson Corporation. All rights reserved.