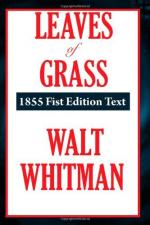 Leaves of Grass - Research Article from Literature and Its Times

Walt Whitman
This encyclopedia article consists of approximately 13 pages of information about Leaves of Grass.

Living during one of the most dynamic, divisive periods in American history, Walt Whitman captured the development of the nation and himself in his masterpiece, Leaves of Grass. The collection of poems, written over thirty-seven years, is at once art and documentary, revealing both personal and universal truths. Innovative in both form and substance, Leaves of Grass offers a positive yet realistic way of perceiving the world by showing the daily miracle of life.

Events in History at the Time of the Poems

Age of development and dissent. The 1850s in America was a period of reform and rapid change. Cities grew and construction boomed as record numbers of immigrants-250,000 annually- flooded the developing nation. Westward expansion, fueled by the gold rush of 1848-49 and the development of an ever-growing railroad network, seemed to indicate a boundless America, full of prosperity...

More summaries and resources for teaching or studying Leaves of Grass.

Leaves of Grass from Gale. ©2008 Thomson Gale, a part of the Thomson Corporation. All rights reserved.