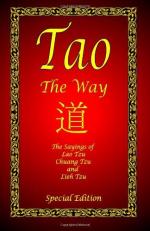 Laozi, according to the Records of History by Sima Qian, is believed to have been an elder contemporary of Confucius (551–479 BCE) and the author of the Laozi (Daode jing or Tao-te-ching), a work roughly five thousand characters long. This and other traditional accounts of Laozi and the date of his work have been seriously challenged, and various hypotheses about the authorship of the work and its date have been proposed. Nevertheless, three incomplete Guodian bamboo versions of the Laozi excavated in 1993 prove that the text was in circulation in the fourth century BCE and may have been composed still earlier.

Laozi is believed to be the first person in Chinese intellectual history to develop a brief theory on the source and grounds of the universe, represented by the concept of Dao (also commonly called Tao in Western writings).

Laozi (Sixth Century Bce) from Macmillan. Copyright © 2001-2006 by Macmillan Reference USA, an imprint of the Gale Group. All rights reserved.