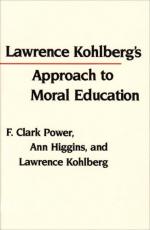 Kohlberg, Lawrence - Research Article from Psychologists and Their Theories for Students

This encyclopedia article consists of approximately 63 pages of information about Kohlberg, Lawrence.

Lawrence Kohlberg was regarded for many years as a leader in the field of moral education and development. Trained in an institution identified with the progressive education ideals of American philosopher John Dewey, Kohlberg came to be regarded by his colleagues as more of an educator than a psychologist. Dissatisfied with the traditional character formation, behaviorist, and psychoanalytic models of moral behavior that were available to educators in the 1960s, Kohlberg worked out an approach to moral development known as cognitive structuralism, or cognitive developmentalism. This approach focuses on the growing child's processes of moral reasoning and the changes that take place in the structures of a person's thinking as he or she matures from childhood into adult life. Cognitive developmentalists regard children as independent agents capable of thinking for themselves about moral issues, as contrasted with...

More summaries and resources for teaching or studying Kohlberg, Lawrence.

Kohlberg, Lawrence from Gale. ©2005-2006 Thomson Gale, a part of the Thomson Corporation. All rights reserved.