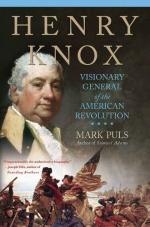 This encyclopedia article consists of approximately 9 pages of information about Knox, Henry.

Known as the father of American army artillery, Henry Knox played a prominent role in most major battles during the American Revolution (1775–83) and became a close adviser and friend to General George Washington (1732–1799; see entry in volume 2) through the war years and during the following early period of the republic. Knox served as secretary of war from 1785 to 1794. He was the only government official to serve in the same capacity in the national government under both the Articles of Confederation and the U.S. Constitution.

Early Interest in the Military

Henry Knox was born on July 25, 1750, the seventh of ten boys of William Knox and Mary Campbell. His parents had emigrated from Ireland to Boston in 1729. William was a shipbuilder but suffered financial setbacks and deserted the family. He went to the...

More summaries and resources for teaching or studying Knox, Henry.