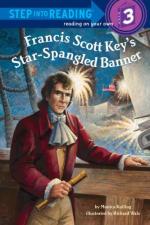 This encyclopedia article consists of approximately 9 pages of information about Key, Francis Scott.

Francis Scott Key wrote the words to the national anthem of the United States, the now-famous song called "The Star-Spangled Banner." Written in September 1814 during the Battle of Baltimore, the song was officially signed into law as the nation's anthem by President Herbert Hoover (1874–1964; served 1929–33) on March 3, 1931. Key was not a professional poet but rather a lawyer who later served as U.S. attorney for the District of Columbia between 1833 and 1841. As the author of the American national anthem, Francis Scott Key has numerous monuments and landmarks dedicated to his memory.

Francis Scott Key was born in Frederick County, Maryland, at Terra Rubra, his family's estate, named for the red earth on which it stood. Francis's mother was Ann Phoebe Penn Dagworthy Charlton, a well-educated woman from a wealthy...