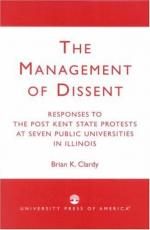 This encyclopedia article consists of approximately 3 pages of information about Kent State Massacre.

For 13 seconds on May 4, 1970, Ohio National Guardsmen opened fire on students protesting the Vietnam War at Kent State University in Kent, Ohio, killing four and wounding nine others.

A protestor holds a sign at the Kent State demonstration after the Massacre.
What had merely been a small campus demonstration—one of thousands nationwide, quickly developed into a symbol of the Vietnam era in America. A Pulitzer Prize winning photograph taken at the shooting of an anguished young woman kneeling over the body of a dead student with her arms raised in despair became a significant illustration of the end of the Woodstock era. Any romantic notions of the 1960s ended with the Kent State massacre.

Kent State Massacre from Gale. ©2005-2006 Thomson Gale, a part of the Thomson Corporation. All rights reserved.