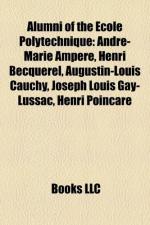 Joseph Louis Gay-Lussac - Research Article from Science and Its Times

This encyclopedia article consists of approximately 3 pages of information about Joseph Louis Gay-Lussac.

Joseph Gay-Lussac was a versatile scientist who made numerous contributions to chemistry and physics, including groundbreaking work in the study of gases, the formulation of a law of combining volumes for chemical reactions, and the development and application of techniques for chemical analysis.

Gay-Lussac graduated from the Ecole Polytechnique in Paris in 1797. Accepting a position as an assistant to Claude Louis Berthollet (1748-1822) in 1801, he became a member of a group of young scientists who lived near Berthollet's private laboratory in the town of Arcueil. This group is now known as the Arcueil circle or the Laplacian school. The latter name is due to the influence of Pierre Simon Laplace (1749-1827), who believed that the application of Newtonian physics to chemical changes would lead to an understanding of chemistry comparable to the quantitative explanations for such physical phenomena as...

Joseph Louis Gay-Lussac from Gale. ©2005-2006 Thomson Gale, a part of the Thomson Corporation. All rights reserved.