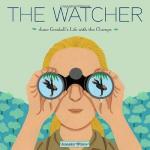 Jane Goodall - Research Article from Science and Its Times

This encyclopedia article consists of approximately 3 pages of information about Jane Goodall.

Primatologist Jane Goodall is best known for her long-term field studies of chimpanzee life and behavior. A leading expert on the subject, many Americans came to know her through a public television series chronicling her life and ongoing research on chimpanzees in Tanzania.

Born in England in 1934, Goodall moved with her family to France when she was five years old. When the Nazis threatened to subjugate France during World War II, the Goodalls returned to England and lived at the family estate known as the Birches, located in Barnemouth and managed by Goodall's maternal grandmother. Goodall remained there until she graduated from high school.

Goodall subsequently attended secretarial school, followed by an assortment of jobs at Oxford University. She later worked briefly for an independent film company specializing in documentaries. Her life brightened considerably when an old school friend invited her to Kenya...

More summaries and resources for teaching or studying Jane Goodall.

Jane Goodall from Gale. ©2005-2006 Thomson Gale, a part of the Thomson Corporation. All rights reserved.