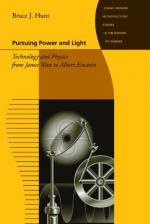 James Watt - Research Article from Science and Its Times

This encyclopedia article consists of approximately 4 pages of information about James Watt.

Although James Watt did not invent the steam engine, he made improvements to already existing engines that greatly increased their power. Watt also developed several other important inventions: a rotary engine to drive machinery; a double-action engine; a steam indicator to measure pressure in an engine; and a centrifugal governor to automatically regulate engine speed. He developed the concept of horsepower to describe the operating strength of engines. Watt also made important surveys of several canal routes and invented a telescope attachment to measure distance. In 1882 the British Association named a unit of electrical power measurement after Watt.

James Watt was born on January 19, 1736, in the village of Greenock in Renfrewshire, Scotland. Watt's grandfather, Thomas, had been a teacher of mathematics, surveying, and navigation; and his father James, the treasurer and magistrate for Greenock, ran a successful business building...

More summaries and resources for teaching or studying James Watt.

James Watt from Gale. ©2005-2006 Thomson Gale, a part of the Thomson Corporation. All rights reserved.