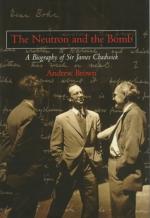 James Chadwick - Research Article from Science and Its Times

This encyclopedia article consists of approximately 3 pages of information about James Chadwick.

The English physicist James Chadwick is primarily remembered for his discovery of the neutron, which other physicists referred to as the historical beginning of nuclear physics. Using the neutron as a tool for investigating the atom, physicists were able to create a wide variety of new radioisotopes, split atoms and molecules, and initiate the nuclear chain reactions that led to the atomic bomb.

James Chadwick, the son of John Joseph Chadwick and Anne Mary Knowles, was born in Cheshire, an English mill town, and later moved with his family to Manchester. While enrolling at the University of Manchester, Chadwick accidentally found himself in the line for those hoping to major in physics. Chadwick, who had intended to be a mathematician, was too shy to seek out the proper line. He graduated from the Honours School of Physics in 1911 and spent the next two...

More summaries and resources for teaching or studying James Chadwick.

James Chadwick from Gale. ©2005-2006 Thomson Gale, a part of the Thomson Corporation. All rights reserved.