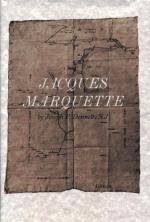 This encyclopedia article consists of approximately 4 pages of information about Jacques Marquette.

In 1672 Louis Jolliet was chosen to lead a French-Canadian expedition to explore the Mississippi River and to discover whether it emptied into the Gulf of Mexico or the Pacific Ocean. French Jesuit missionary Jacques Marquette was chosen to go along as the expedition’s interpreter, for he spoke several Indian languages fluently. The information he learned from Native Americans proved invaluable to the explorers as they made their way into the unknown. In addition—when Jolliet’s account of the expedition was lost in a canoe accident—Marquette’s journal became the only first-person record of the historic trip.

Marquette was born on June 10, 1637, in the northern French town of Laon. The son of a distinguished family, he entered the Jesuit order in 1654, studying to become a priest. During...

More summaries and resources for teaching or studying Jacques Marquette.

Jacques Marquette from UXL. ©2005-2006 by U•X•L. U•X•L is an imprint of Thomson Gale, a division of Thomson Learning, Inc. All rights reserved.