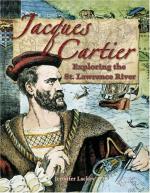 Jacques Cartier - Research Article from Science and Its Times

This encyclopedia article consists of approximately 2 pages of information about Jacques Cartier.

Jacques Cartier is the adventurer who is often credited with discovering Canada. He was the first European to locate the Gulf of St. Lawrence and the St. Lawrence River, and was the first to venture deep into the northern wilderness of the North American continent. The accounts he made of his journeys became the basis for the first maps of the area. Those maps opened the major routes followed by later French explorers into Canada.

Born in the port of Saint-Malo, in the French province of Brittany in 1491, Cartier began his seafaring career with a number of voyages to Brazil, Newfoundland and perhaps even to America as a member of Giovanni da Verrazzano's crew in the 1520s. His first recorded journey, however, was his expedition to the New World in 1534. He received command of the voyage after the bishop of Saint-Malo...

More summaries and resources for teaching or studying Jacques Cartier.

Jacques Cartier from Gale. ©2005-2006 Thomson Gale, a part of the Thomson Corporation. All rights reserved.