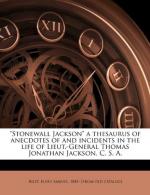 Thomas Jackson was one of the South's most important generals in the Civil War, a man who became an icon of the Southern fighting spirit and the "Lost Cause."

Born in what is now West Virginia, Jackson was only two years old when his father, an attorney, contracted typhoid fever and died. Now a widow, Jackson's mother, Julia, was saddled with the family's considerable debt. In 1830, she married Blake Woodson, a shabby genteel man with numerous children scattered across the country, who was fifteen years her senior. Refined and charming in public, in private he was a hard man who detested Julia's children. They were soon sent away to live with various relatives.

Despite a less than rigorous early education, Jackson was admitted to West Point in 1842, but only after his congressman's first choice for an...

Jackson, Thomas J. (Stonewall) from Macmillan. Copyright © 2001-2006 by Macmillan Reference USA, an imprint of the Gale Group. All rights reserved.