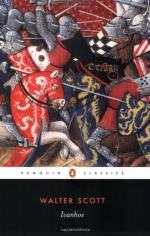 Ivanhoe - Research Article from Literature and Its Times

Walter Scott
This encyclopedia article consists of approximately 13 pages of information about Ivanhoe.

Sit Walter Scott was born in Edinburgh, Scotland, in 1771. Scotland had only recently (in 1707) united with England to form the United Kingdom. At the time of union, Scotland was still a relatively undeveloped country, with half of its population made up of Highland clansmen. It was not until 1745 that Scotland began to close the technological and social gap with England. The forced merging of an advanced culture and an unsophisticated culture into one society became a common theme of Sir Walter's novels. During the era in which Ivanhoe takes place, tension existed between the advanced Normans and the less sophisticated Anglo-Saxons.

The Norman Conquest. In 1066 A.D., Duke William of Normandy (a section of modern-day France) landed in England with an army, defeated the English at the battle of Hastings, and became king of...

Ivanhoe from Gale. ©2008 Thomson Gale, a part of the Thomson Corporation. All rights reserved.