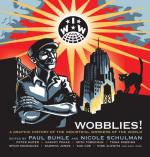 This encyclopedia article consists of approximately 12 pages of information about Industrial Workers of the World.

At the turn of the twentieth century American laborers had been generally unionized by organizations such as the Knights of Labor and smaller organizations. The most formidable union was the 25-year-old American Federation of Labor (AFL), but it still excluded many workers from membership. Typical working conditions, particularly in industrial workplaces, were poor and dangerous. Unskilled workers, often seen as interchangeable, replaceable commodities, were at peril.

The goal of the Industrial Workers of the World (IWW) was to organize all United States workers into "one big union." Unlike other unions of the day, this union's creators did not care about race, gender, or ethnic background. What they wanted was an end to capitalism with just, equitable working conditions for all working-class people. The IWW also espoused concepts that were alien in blue-collar America, chiefly an eight-hour work...

More summaries and resources for teaching or studying Industrial Workers of the World.

Industrial Workers of the World from Gale. ©2005-2006 Thomson Gale, a part of the Thomson Corporation. All rights reserved.