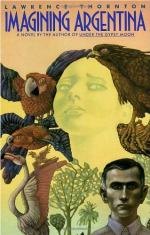 Imagining Argentina - Research Article from Literature and Its Times

Lawrence Thornton (1937- ) earned his Ph.D. at the University of California and was a visiting professor at its Santa Barbara and Los Angeles campuses from 1984 to 1988 when he wrote his first novel, Imagining Argentina. Thornton, an English professor, became interested in a story he saw on the CBS television news magazine 60 Minutes about Argentina's "dirty war." From 1976 to 1983, Argentina was ruled by a group of generals who targeted thousands of their own citizens, attempting to snuff out political opposition and free speech by kidnapping, torturing, and murdering any Argentines suspected of liberal or antigovernment views. Thornton's novel tells the story of the victims of this dirty war-known as desaparecidos, or "disappeared ones"-through the eyes of a fictional journalist, Martin Benn, and his friend Carlos Rueda, whose wife is among the desaparecidos.

Imagining Argentina from Gale. ©2008 Thomson Gale, a part of the Thomson Corporation. All rights reserved.