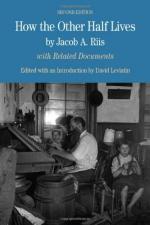 How the Other Half Lives - Research Article from Development of the Industrial U.S. Reference Library

This encyclopedia article consists of approximately 14 pages of information about How the Other Half Lives.

Excerpt from How the Other Half Lives: Studies Among the Tenements of New York

By Jacob A. Riis

Reprinted in 1957 by Hill and Wang

Newspaper reporter and photojournalist Jacob Riis (1849–1914) was one of the earliest social reformers to use his work to document the effects of industrialization on the lower-class citizens of the United States. Riis's articles, books, and photographs helped focus public attention on the unhealthy living and working conditions experienced by many of his fellow New Yorkers, and he was credited for bringing about many governmental reforms in the city.

Riis was born in Ribe, Denmark, and received most of his early schooling from his father, a teacher who also worked for a local weekly paper. As a young man Riis trained to be a carpenter, but at the age of twenty-one he decided to...

More summaries and resources for teaching or studying How the Other Half Lives.

How the Other Half Lives from UXL. ©2005-2006 by U•X•L. U•X•L is an imprint of Thomson Gale, a division of Thomson Learning, Inc. All rights reserved.