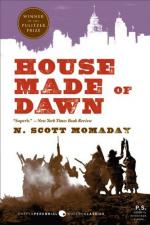 House Made of Dawn - Research Article from Literature and Its Times

N. Scott Momaday
This encyclopedia article consists of approximately 15 pages of information about House Made of Dawn.

Of Kiowa, Cherokee, and Anglo descent, N. Scott Momaday (whose Kiowan name is Tsoai-talee, which means "Rock Tree Boy") was born in Oklahoma and raised in New Mexico. He lived on the Jemez Reservation and received degrees from the University of New Mexico and Stanford University. In his novel House Made of Dawn, Momaday illustrates the profound displacement experienced by many American Indians in the post-World War 11 era. The novel shows both the war's devastating effects on Indian veterans as well as the equally detrimental U.S. policy toward the general American Indian population in the postwar period. Momaday's novel also incorporates elements of the culture and tradition that tribes have managed to sustain on reservations such as the Jemez Pueblo, portraying the strength that can be drawn from these traditions.

More summaries and resources for teaching or studying House Made of Dawn.

House Made of Dawn from Gale. ©2008 Thomson Gale, a part of the Thomson Corporation. All rights reserved.