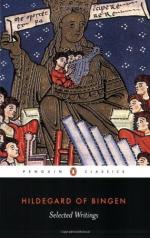 Hildegard Von Bingen - Research Article from Science and Its Times

This encyclopedia article consists of approximately 3 pages of information about Hildegard Von Bingen.

The achievements of the Benedictine nun Hildegard von Bingen were astonishing in their range and excellence, particularly for a woman of the twelfth century. During a time in which female activities were restricted, she became the first woman authorized by the Pope to write theological works, the only medieval woman to preach publicly, the author of the first known morality play, the most prolific medieval composer of liturgical plainchant, an artist who created unique illuminated manuscripts, the author of the first book written by a woman on herbal medicine, and one of the earliest scientific writers to discuss sexuality and gynecology from a female perspective.

Hildegard, born in 1098 in the rural Rhineland, was the tenth child of a noble family. At the age of eight, she was dedicated to the Church as a "tithe"—an offering...

Hildegard Von Bingen from Gale. ©2005-2006 Thomson Gale, a part of the Thomson Corporation. All rights reserved.