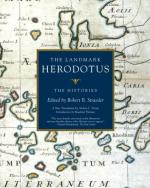 Herodotus - Research Article from Science and Its Times

This encyclopedia article consists of approximately 3 pages of information about Herodotus.

Hailed as the "Father of History," Herodotus wrote the first known prose history in Western literature. Writing at a time when history was still a dubious mix of myth and verse, he gathered information on the geography and people of the eastern Mediterranean and Persia as background for his detailed account of the war between Greece and Persia from 499 to 479 B.C. His interest in the people and culture in his account is also recognized as an early foray into anthropology.

Though Herodotus is one of the most famous ancient writers, little is known of his life. He was born in Halicarnassus, a Greek city on the west coast of Asia Minor, now Turkey. He reports seeing the defeated Persian fleet arrive in the harbor at Halicarnassus when he was five years old. This occurred in 479 B.C., so it seems...

More summaries and resources for teaching or studying Herodotus.

Herodotus from Gale. ©2005-2006 Thomson Gale, a part of the Thomson Corporation. All rights reserved.