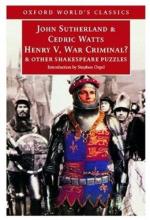 Henry V - Research Article from World Literature and Its Times

By 1598, near the end of his first decade as a playwright, William Shakespeare had written a number of plays that dramatized Englands recent past. These plays concerned the struggles for control of the English throne that ravaged the country between 1399 and 1485. Henry V was the last of this set of plays to be written, and the only one that does not concentrate on the seizure of the English throne; rather, the triumphant reign of King Henry V, with its crowning jewel, the subjugation of the French at the Battle of Agincourt, provides the focus of the play. The play highlights a critical stage in the consolidation of authority under the English monarch.

More summaries and resources for teaching or studying Henry V.

Henry V from Gale. ©2008 Thomson Gale, a part of the Thomson Corporation. All rights reserved.