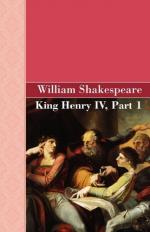 Henry IV, Part I - Research Article from Literature and Its Times

William Shakespeare
This encyclopedia article consists of approximately 12 pages of information about Henry IV, Part I.

AIthough he may have learned some aspects of successful play writing from other dramatists of his time, William Shakespeare remains a major innovator of the English history play. Such early Shakespeare plays as Henry VI and Richard III were among the first to achieve any sort of commercial success. In Henry IV, Part I, Shakespeare continues his tradition of re-enacting the history of his native land.

The reign of Henry IV. Because he had actively opposed Richard II, the reigning king of England from 1376 to 1399, Henry Bolingbroke was living in exile when he succeeded his father as Duke of Lancaster. Immediately following this inheritance, King Richard seized Henry's lands and his title and ordered him into exile for life. Henry soon returned to England with a band of supporters...

More summaries and resources for teaching or studying Henry IV, Part I.

Henry IV, Part I from Gale. ©2008 Thomson Gale, a part of the Thomson Corporation. All rights reserved.