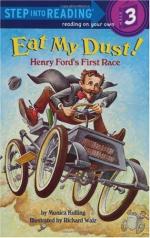 Henry Ford - Research Article from Science and Its Times

This encyclopedia article consists of approximately 4 pages of information about Henry Ford.

Although he did not invent the technology that made him famous, Ford's profound impact on American culture cannot be underestimated. The development of the automobile, which opened up the nation for its people, and the assembly line, which established mass production as the mechanism for economic power, were perfected by Ford. Both transformed American life. Under Ford's leadership, the automobile went from a luxury to a necessity and inaugurated the "car culture."

Born in Dearborn, Michigan, in 1863, Henry Ford had an aptitude for machinery. However, it was the sight of a coal-fired steam engine in 1876 that set in motion his later triumphs. By age 16, leaving the family farm against his father's wishes, Ford apprenticed in a machine shop in Detroit. He found the work inspirational, and was especially interested in the new gasoline-powered internal combustion engines, which had been developed by German engineer...

More summaries and resources for teaching or studying Henry Ford.

Henry Ford from Gale. ©2005-2006 Thomson Gale, a part of the Thomson Corporation. All rights reserved.