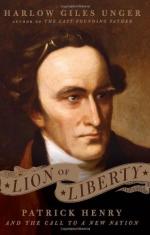 "Give Me Liberty, or Give Me Death!" by Patrick Henry - Research Article from American Revolution Reference Library

This encyclopedia article consists of approximately 9 pages of information about &#X0022;Give Me Liberty, or Give Me Death!&#x0022; by Patrick Henry.

"Give me liberty, or give me death!"

"Is life so dear, or peace so sweet, as to be purchased at the price of chains and slavery? Forbid it, Almighty God! I know not what course others may take, but as for me, give me liberty, or give me death!"

On December 16, 1773, a group of patriots from Boston, Massachusetts, disguised as Indians, dumped 342 chests of tea into Boston Harbor to show their disgust over British taxes. The act became known as the Boston Tea Party. In early 1774, Great Britain passed the Intolerable Acts to punish Boston and Massachusetts for the Tea Party. One of the Intolerable Acts closed the port of Boston. To show their sympathy for the...

More summaries and resources for teaching or studying "Give Me Liberty, or Give Me Death!" by Patrick Henry.