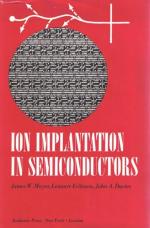 This encyclopedia article consists of approximately 5 pages of information about Germanium.

Germanium is a metalloid. A metalloid is an element that has characteristics of both metals and non-metals. Germanium is located in the middle of the carbon family, which is Group 14 (IVA) in the periodic table. The periodic table is a chart that shows how chemical elements are related to each other. Carbon and silicon are above germanium and tin and lead are below it.

The existence of germanium was predicted by Russian chemist Dmitri Mendeleev (1834-1907), who developed the periodic table. Mendeleev predicted a new element would be found to fill an empty spot on the table. He was proved correct in 1886.

Until the 1950s, there were no important uses for germanium. Then, the transistor was invented. A transistor is a device used to control the flow of electricity in a circuit. Today, germanium is...

More summaries and resources for teaching or studying Germanium.