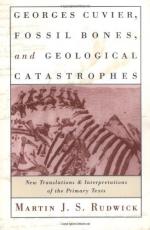 In the wake of the French Revolution (1789-99), young naturalist Georges Cuvier took up arms against conventional beliefs calling into question the accepted view of the history of Earth as well as the relatedness of fossil organisms to living species. Through extensive field collection and meticulous study of fossil specimens, Cuvier began amassing the evidence that would establish extinction as a biological reality. His methodologies, field practices and procedures, and groundbreaking work paved the way for future paleontologists.

Fossils have fascinated and mystified humans for thousands of years. Collected, discussed, and described by such historical figures as Aristotle (384-322 B.C.), Leonardo da Vinci (1452-1519), and Martin Luther (1483-1546), fossil origins served as a source of speculation and debate. Once believed to form in Earth's crust by processes similar to the crystallization of minerals, by the late 1600s fossils were...