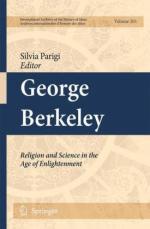 George Berkeley - Research Article from Science and Its Times

This encyclopedia article consists of approximately 3 pages of information about George Berkeley.

George Berkeley is best remembered for his attempt to reconcile religion and science through his empiricist philosophy that separated a phenomenon's true existence from attempts to explain it through scientific laws and theories.

Berkeley received his formal education at Kilkenny College and at Trinity College in Dublin, receiving his B.A. degree in 1704. He was elected a fellow of Trinity in 1707 and remained associated with the College until 1724 when he became the Dean of Derry. In 1733 he was elevated to the position of Bishop of Cloyne.

Berkeley read widely and became thoroughly familiar with the scientific and philosophical developments that grew out of Newtonian physics. As a result of his deep religious convictions, he attempted to overcome the apparent conflict between the religious and scientific perceptions of the world. He became a spokesman for the Anglican church and a defender of the Christian...

More summaries and resources for teaching or studying George Berkeley.

George Berkeley from Gale. ©2005-2006 Thomson Gale, a part of the Thomson Corporation. All rights reserved.