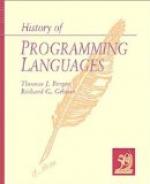 This encyclopedia article consists of approximately 7 pages of information about Generations, Languages.

Programming languages are the primary tools for creating software. As of 2002, hundreds exist, some more used than others, and each claiming to be the best. In contrast, in the days when computers were being developed there was just one language—machine language.

Programming of the first stored-program computer systems was performed in machine language. This is the lowest level of programming language. All the commands and data values are given in ones and zeros, corresponding to the "on" and "off" electrical states in a computer.

In the 1950s each computer had its own native language, and programmers had primitive systems for combining numbers...

More summaries and resources for teaching or studying Generations, Languages.

Generations, Languages from Macmillan. Copyright © 2001-2006 by Macmillan Reference USA, an imprint of the Gale Group. All rights reserved.