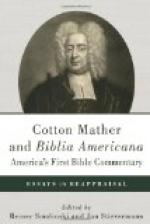 This encyclopedia article consists of approximately 4 pages of information about From the Wonders of the Invisible World (1693) by Cotton Mather.

From The Wonders of the Invisible World (1693)

Reprinted in American Literature: A Prentice
Hall Anthology, Volume 1 in 1991

Cotton Mather (see biography and primary source entry with Ezekial Cheever) was a prominent minister in Boston, Massachusetts, who became closely involved in the Salem witch trials. Although he was not a trial judge, he worked in conjunction with his father, Increase Mather (see primary source entry), to root out witches who were doing the work of the devil in New England. Cotton Mather thought that witches were not possessed by spirits, but that they were agents of the devil. Modern historians have been mystified by Cotton Mather: although he was one of the foremost American intellectuals and scientists of the time, he was capable of deep superstition, even ignorance, in religious matters...

More summaries and resources for teaching or studying From the Wonders of the Invisible World (1693) by Cotton Mather.