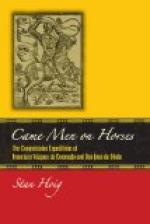 Francisco Vásquez de Coronado, a Spanish nobleman and explorer, led the first European expedition into what is now the southwestern United States. Though the expedition did not accomplish its mission—to find gold—it did discover numerous geographical landmarks, including the Grand Canyon.

Coronado went to Mexico (then the viceroyalty of New Spain) as a member of a group led by Antonio de Mendoza, the colony’s first viceroy. After helping to put down an uprising in the king’s mines, Coronado was named governor of New Galicia, a province on the western coast of Mexico. As governor, he oversaw Spanish explorations on the province’s northern frontier.

Francisco Vásquez de Coronado from UXL. ©2005-2006 by U•X•L. U•X•L is an imprint of Thomson Gale, a division of Thomson Learning, Inc. All rights reserved.