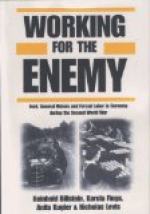 This encyclopedia article consists of approximately 11 pages of information about Forced Labor: Germany.

By 1945 there were several million foreign laborers working in slave conditions in the German economy. The emergence of forced labor was the product of three distinct factors: first, the defeat of the free-labor movement in 1933, which had profound consequences for the condition of all labor, "native" as well as "foreign"; second, the wartime capture of foreign labor, especially Slav workers, millions of whom were set to work in the maintenance of the German war effort; and third, the particular conditions of racial minorities, especially the Jews of Germany, Poland, and Russia. Hundreds of thousands of Jews were forced to work in slave conditions, while many others would be killed more quickly in the Holocaust.

Forced Labor: Germany from Greenhaven. ©2001-2006 by Greenhaven Press, Inc., an imprint of The Gale Group. All rights reserved.