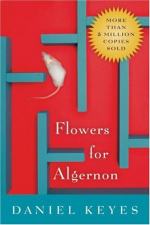 Flowers for Algernon - Research Article from Literature and Its Times

Daniel Keyes
This encyclopedia article consists of approximately 14 pages of information about Flowers for Algernon.

Born in 1927 in Brooklyn, New York, Daniel Keyes attained critical success with the publication of the short story "Flowers for Algernon" (1959), which was quickly anthologized and won several awards. The story has since been adapted into theater, television, and cinematic versions. In 1966 Keyes published the story in novel form.

Changing attitudes toward the developmentally disabled. Prior to 1930 more extreme public opinion viewed the mentally handicapped as degenerate human beings and social menaces who should be institutionalized or segregated from society as much as possible. Charlie is thirtytwo years old in the novel, which takes place at the time when this attitude was no longer as prevalent, yet it would certainly have affected the outlook of Charlie's mother, who plays an important role in his development. Charlie remembers his mother's overwhelming sense of...

More summaries and resources for teaching or studying Flowers for Algernon.

Flowers for Algernon from Gale. ©2008 Thomson Gale, a part of the Thomson Corporation. All rights reserved.