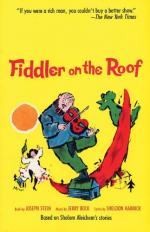 Fiddler on the Roof - Research Article from Literature and Its Times

Joseph Stein
This encyclopedia article consists of approximately 14 pages of information about Fiddler on the Roof.

Jn the early 1960s, writer Joseph Stein teamed up in America with composer Jerry Bock and poet Sheldon Harnick to create the musical Fiddler on the Roof. Stein, who would compose the text for the play, had already written several radio and television dramas, and Bock and Harnick had collaborated on songs for other musicals. Although Harold Prince, their manager, worried that a play about Jewish life in a small Russian town would appeal to only a small faction of the American public, Fiddler on the Roof proved to be highly successful.

Traditional Jewish marriage. In the Jewish villages of Russia and Eastern Europe, marriages were arranged by a matchmaker, or shadkhen. The shadkhen matched partners based on their wealth and education and sought the approval of neither the...

More summaries and resources for teaching or studying Fiddler on the Roof.

Fiddler on the Roof from Gale. ©2008 Thomson Gale, a part of the Thomson Corporation. All rights reserved.